Commissioning takes the Win and You’re In Rockfel Stakes 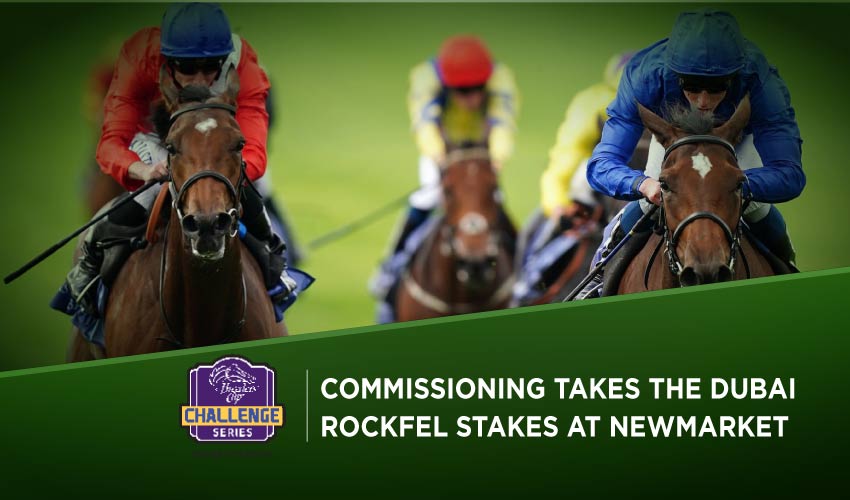 This past Friday saw the second day of this year’s 3 day Newmarket Al Basti Festival. Race goers had seven superb races to look forward too with the highlights being the Group 2 Rockfel Stakes where Commissioning struck gold and the Group 2 Joel Stakes.

Here is everything that happened.

This year’s Rockfel was set to give clues as to who could play a major part in next year’s 1,000 Guineas. With fourteen horses heading to post it was an exciting renewal with the winner not only landing this prestigious prize but also earning a spot in this season’s Breeders’ Cup Juvenile Fillies Turf.

Favourite for the race was the Mick O’Callaghan Olivia Maralda who was looking to build on some previously promising displays.

Things started well for the favourite who was prominent throughout the race. Looking to make her move at the two furlong pole, jockey Rossa Ryan asked his mount for more but the answer wasn’t forthcoming. Clearly paddling, Olivia Maralda couldn’t keep up with the pace of the leaders and would drop back to finish a disappointing 10th.

With the favourite out of the picture, the race looked like it would be between two relatively unexposed horses, Rage of Bumby and Commissioning.

Both headed into the race unbeaten and looked to serve it up to one another. It was Rage of Bumpy who edged ahead but Commissioning always had her in her sights.

With just a furlong to go it was the John Gosden trained fillie who edged ahead and once she hit the front she wouldn’t be pegged back. The only danger to the leader was the surging Electric Eyes who ran a great race at a big price to finish second.

At the line the winner was in a class of her own and she looks set for a huge future. With her victory she now has a spot in the BC Juvenile Fillies Turf but it remains to be seen whether Gosden will turn attentions to next year or take up her spot at Keeneland later this year.

Hot on the heels of this year’s Rockfel came the Joel Stakes, a Group 2 race for horses three and over.

In a relatively small field of just six runners, the money came thick and fast for the Archie Watson trained Tempus who was looking for his fourth race victory in succession following two earlier victories at Group 3 level.

Things didn’t get off to a great start for the favourite as he stumbled out of the starting stalls and handed the early initiative to his rivals.

On the back foot, jockey Hollie Doyle couldn’t get Tempus to settle and despite rallying late he would only finish third.

In our preview we flagged the danger of Mutasaabeq. Although the wins haven’t come this season, the Charlie Hills trained horse has run with credit in similar races.

Getting the perfect start, Jim Crowley was happy to let his charge lead and pull the rest of the field along.

Setting a good even gallop, Mutasaabeq was able to keep up the pace heading into the final furlong. Looking to fend off his rivals, in particular the fast finishing El Drama, Crowley asked Mutasaabeq for more and the answer was immediate.

Showing he had much more left in the tank, Mutasaabeq was able to find more to win by a length at the line.

It was a performance that smacked of a top quality horse and it will be fascinating to see if Mutasaabeq will have a crack at one of the remaining Group 1 races before the flat season comes to an end.

Follow us on Social Media for more Newmarket updates!