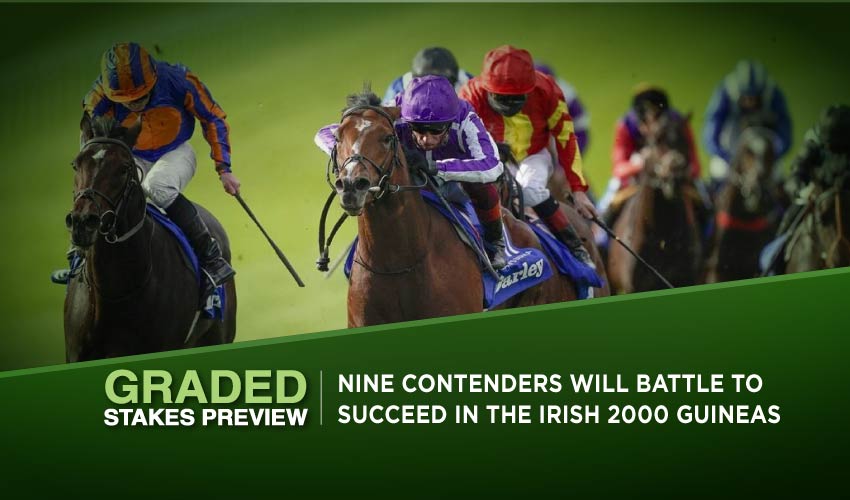 The upcoming weekend offers Classic action at the Irish racecourse of Curragh. On Saturday, three-year-old colts will clash in the Irish 2000 Guineas where Native Trail could gain some compensation for second place in the British 2000 Guineas.

Something similar could happen on Sunday because Tuesday will line up with other three-year-old fillies in the Irish 1000 Guineas, and she will attempt to improve her result from the British analogy where she finished third. Four-year-old and older horses then head into the G1 Tattersalls Gold Cup, with Lord North being the star of the classy field.

The first Classic race of the Irish Flat season is open to three-year-old colts (no geldings) who are about to compete for the purse of €400,000. On the mile-long distance and turf surface, nine participants will vie for the victory here, with Native Trail being the very hot favourite here.

The Charlie Appleby bound bay ran four races as a junior and bagged all of them, including the G1 Dewhurst Stakes, cementing his position as the best two-year-old of the season 2021. The son of Oasis Dream commenced his three-year-old campaign in the Classic trial, the G3 Craven Stakes, where Native Trail prevailed easily by more than three lengths and, therefore, started off to the British 2000 Guineas in a role of a favourite.

Under William Buick, he galloped beautifully and rallied forward in the closing stages; however, his stable-mate Coroebus was just better on that day, and Native Trail had to settle for his premiere defeat. Still, he will bump into a less daunting field of three-year-olds on Saturday, which means he should gain compensation for the second place in Newmarket and earn the Classic glory here.

The main threats come from the local stables as Joseph O’Brien relies on the Fastnet Rock colt Buckaroo. As a two-year-old, the colt didn’t draw much attention by his results, winning just a maiden (but in front of Stone Age); however, in the ongoing season, he recorded his debut in a G3 race where he finished a close second.

Subsequently, Buckaroo quickened beautifully in a Listed race over a mile and scored it by four lengths in front of Wexford Native. For the latter trainee of Jim Bolger, it was just his second career outing, and even though he should improve on that, going for the Classic race might be too soon for the son of Teofilo. Aidan O’Brien sends in only one contestant – a son of Galileo named Ivy League. The bay debuted in March with sixth place, upon which he bagged maiden and handicap victories. Last time out, Ivy League finished second in the G3 Amethyst Stakes when sent off as a favorite.

There might be something about him, but he needs to considerably step up his game to even get close to Native Trail, who looks like a real champ. The last to mention is Atomic Jones, trained by Ger Lyons for whom the colt achieved the G2 Champions Juvenile Stakes before Stone Age, one of the current Epsom Derby leading chances.

However, Stone Age bettered Atomic Jones easily on his seasonal reappearance, which probably caused the change of plans – Atomic Jones returns to the mile distance instead of focusing on the Derby. Moreover, there are other races worldwide on his agenda after his Saturday outing.

Native Trail, whose class seems way above the rest of the field.

The second Classic race of the Irish Flat season is on Sunday’s card, with fourteen three-year-old fillies clashing at the distance of a mile for the purse of €400,000. Aidan O’Brien sends numerous fillies into this G1 turf race but especially brilliantly bred bay Tuesday.

She is full-sister to outstanding Minding and Classic winner Empress Josephine, and therefore, it’s just in her blood to become a star for the connections, and it seems she’s set on the right path to achieve her premiere G1 victory.

In 2021, Tuesday recorded only a second place in her debut behind a subsequent winner among the elite, Discoveries. She then commenced the new season with a maiden win, upon which she ran a very solid race in the British 1000 Guineas, securing third place behind Cachet. If he repeats the form on Sunday, Tuesday should at least fight for the win.

Regarding the other Aidan O’Brien’s trainees here, History looks the second best after entering the season with a fine win in the G3 Cornelscourt Stakes, where she bettered preferred Agartha. History looks classy enough to snatch up a place here, which also applies to Agartha; however, the last year’s G2 victress failed to prevail in both of her 2022 outings.

Before she stayed behind History, she was left hanging in the closing stages of the 1000 Guineas trial because of the fatal finish delivered by Homeless Songs.

This filly trained by Dermot Weld didn’t show much as a two-year-old; however, her only start of 2022 was so eye-catching, that he immediately became one of the leading chances for the Classic itself. She just bolted up in the final stretch back then and quickly passed by all of her rivals when rallying from the rear of the field to score the race by a length.

Being a bit green might prevent her from earning the Classic glory; still, she is considered the most serious threat to the favorite. The last to mention is the British hope in the Irish 1000 Guineas, Mise En Scene, whose autumn outings in 2021 were quite disappointing, but she seems capable of making amends here for the trainer James Ferguson.

Tuesday, as she’s just bred to be a brilliant three-year-old filly. We also like History for a good place here.

Four-year-old and older horses line up in this G1 turf race held at the distance of a mile and two and a half furlongs. With the purse of €300,000 up for grabs, the field is stronger than last year as Lord North set the quality quite high.

The John and Thady Gosden bound five-year-old gelding crept into the G1 contention in 2020 when scoring the Prince of Wales’s Stakes and earning some money in other outings among the elite. Even though he ran only once in 2021, he still managed to show off his class when destroying the field in the G1 Dubai Turf.

He stayed on the sidelines until the ongoing season, which he commenced with the second place in a Listed race behind Alenquer, but as soon as he hit the track in Meydan once again, he didn’t hesitate to dig deep and recorded a dead-heat victory in the Dubai Turf. Since March, he rested, and he might need a race before returning to his stellar shape; still, he needs to be considered the favourite here due to his career exploits.

The British raider finds its most dangerous threat in Joseph O’Brien trained State of Rest, a four-year-old colt and the best offspring of sprinter Starspangledbanner. As a junior, State of Rest didn’t catch the eye almost at all, but in 2021, he bagged two G1 wins when travelling to the US and Australia.

In August, prevailed in the Saratoga Derby Invitational Stakes, upon which he affirmed to be an extraordinarily great horse over the middle distances as he delivered in the G1 Cox Plate in front of local stars Anamoe and Verry Elleegant. In 2022, State of Rest has already achieved another G1 triumph by winning the G1 Prix Ganay in France.

Because he’s yet to face a horse of such a calibre as Lord North, State of Rest is just the second chance here, but Alenquer shouldn’t be discarded entirely, too. The four-year-old colt trained by William Haggas is a G2 victor who placed among the elite in the Grand Prix de Paris and Juddmonte International.

Upon bettering Lord North in the seasonal debut, he didn’t fire in the G1 Dubai Sheema Classic as Alenquer seems to thrive at the middle distance in particular. On Sunday, his win would be a bit surprising, yet it’s necessary to bear in mind his age – he’s only a four-year-old with plenty of time to develop into even a better horse.

In last year’s edition, Helvic Dream denied Broome the triumph by a short head. While the former improves with each start throughout the season and thus isn’t really considered in his second start of 2022, Broome is classy enough to snatch up a good place here. The Aidan O’Brien bound bay is a good horse but usually lacks something to score the high-quality packed events.

Lord North due to his proven class. State of Rest seems to be a very talented colt, yet he’s yet to take on such a champ Lord North is

Make sure to stay tuned for the latest racing odds, Horse racing entries and Races results. Sign up and get a 10% rebate. We have the biggest rebate!

If you love Horse Racing as we do check our Horse Betting Guide. We have a guide for all levels! Beginners, Intermediate Handicappers!