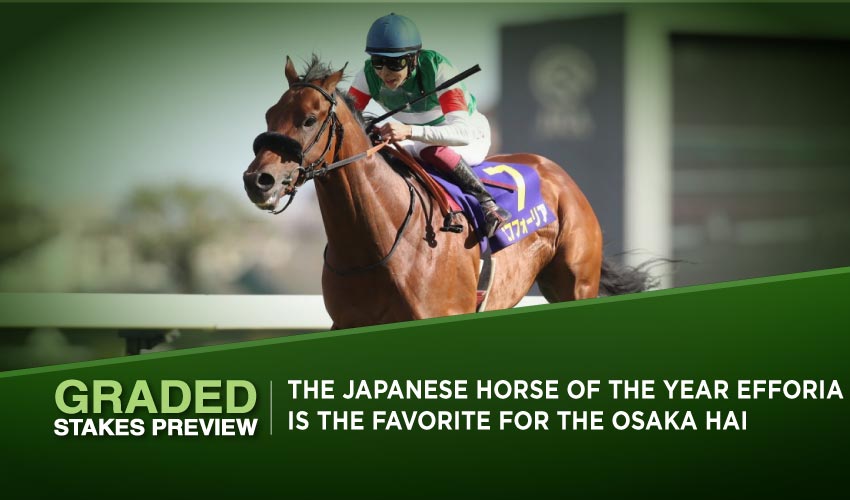 This weekend, two Graded races are to be held at the Japanese Racecourses. On Saturday, the G3 Lord Derby Challenge Trophy headlines the card at Nakayama, and on Sunday, talented Jack d’Or will challenge champion Efforia in the G1 Osaka Hai at the Hanshin track.

This G3 turf race attracted a field of sixteen four-year-old and older horses who will clash at the distance of a mile. As the race is a handicap, the participants compete for the purse of 78,110,000 Yen when carrying different weights, while Zadar is the most carrying one here.

The six-year-old horse scored a G3 race last time out, and even though he’s disadvantaged against his rivals, he still needs to be considered as he is capable of delivering good results at this stage. He likes the distance and is in form, but in that G3 race, he bettered Kaiser Minoru, who will carry less than him this time. The six-year-old horse collected some places, even at the G2 level.

Bom Servico bagged a Listed victory in March, leaving Mikki Brillante behind, while Darlington Hall finished second at the stage in February; however, he is a G3 winner from 2020. Although he didn’t win since, there’s something about him, and he shouldn’t be discarded.

Four-year-old Gratias failed in the Classic races of the 2021 season, but this company should go more into his stride, and four-year-old filly Reframe (also belongs among victory candidates as she has a weight advantage over her rivals; moreover, she’s vying for the third triumph in a row. She hasn’t succeeded at the Graded stage yet, but she could hint she’s good enough to strike gold on Saturday.

Reframe, who should use her light weight and conclude a victorious hattrick.

The prestigious race is held at the distance of a mile and a quarter with the purse of 384,800,000 Yen up for grabs. On the turf surface, sixteen four-year-old and older horses will compete in this G1 event, while the main star of the field is the Japanese horse of the year, four-year-old Efforia.

The Yuichi Shikato bound champion didn’t win only one of his seven outings when he was beaten in the Japanese Derby after he bagged the 2000 Guineas; moreover, he scored the G1 Tenno Sho in front of Contrail and also the Arima Kinen.

On Sunday, he’s about to hit the track for the first time in 2022, so he could be vulnerable, but he still is the leading chance here even though Jack d’Or has great credentials. The four-year-old colt won five races in a row, most recently in the G2 Kinko Sho in March, thanks to his front-running tactic.

This couple of colts should fight for the win because last time out; Jack d’Or left easily behind both Lei Papale and Akai Ito, while Stellaria could place here at best. All of the mares and fillies are decent ones, however, Efforia just seems to be a class ahead.

Our Osaka Hai Betting Pick is:

Efforia due to his last year’s exploits. Jack d’Or is a promising colt, too, but he hasn’t run into such a star like Efforia yet.

Follow us on Social Media for Osaka Hai updates!