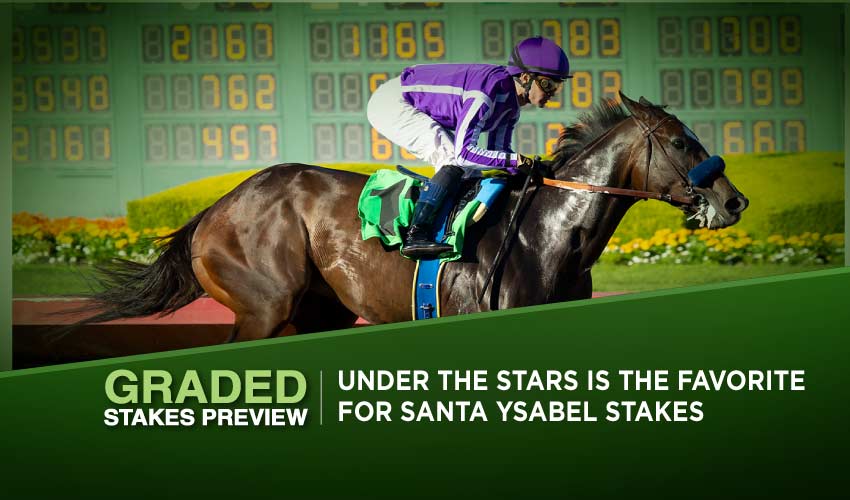 The relative calm after the stakes-race storm puts the Grade 3 Santa Ysabel centre stage at Santa Anita on Sunday, and this Kentucky Oaks prep is a tightly contested heat with three very promising fillies in opposition. The Bob Baffert-trained pair of Under The Stars (Grade 2 winner) and Eda (Grade 1) take on Grade 2 winner Ain’t Easy in a race that could be very influential going forward.

It might be expected that Bob Baffert has won the Santa Ysabel, the feature event of Sunday’s meeting at Santa Anita, more times than anyone else, but his last victory in this Kentucky Oaks prep was eight years ago and he puts two in the gate in a bid to end that streak.

There are 50 points on offer for the winner in the ‘Road to the Kentucky Oaks’ series, but obviously neither Baffert filly is eligible for points. The purse is a different matter, though, and the trainer has two of the first three in the betting, headed by Under The Stars, who made her stakes breakthrough when winning the Grade 2 Santa Ynez here over seven furlongs in January, digging deep in the final sixteenth to hold on by three-quarters of a length.

Under The Stars clearly has a lot of class but stretches out beyond a mile for the first time, something her barnmate Eda has already done successfully. She relished the mile-sixteenth at Los Alamitos when rallying bravely to win the Grade 1 Starlet by half a length from the fast-finishing Cairo Memories , with Desert Dawn three and a quarter lengths back in fourth, and on her previous start Eda beat Under The Stars into third place in a stakes at Del Mar over six and a half furlongs.

That was the first start on the main track for Cairo Memories after three on turf and she clearly adapted well, and further improvement may be expected.

The last of the three leading contenders is Ain’t Easy, the least experienced of the big trio, who is unbeaten in two after an impressive success in the Grade 2 Chandelier over course and distance in October. She drew off to score by four and three-quarter lengths – barnmate Desert Dawn another length and a quarter away in third – and has ample scope to move up further, although she must overcome a five-month layoff.

Fortunata Tensio does have a win to her name, but makes her debut on the main track today and was well beaten in a turf stakes here in January, and although dual course winner Classical Romance is bidding for a three-timer she has never won outside claiming grade.

Ain’t Easy may not be at her peak after a long layoff and this looks between the Baffert fillies – EDA is a Grade 1 winner at this distance and is the choice to outstay her barnmate.

Take a look to our Horse racing odds, racing entries, and races results. Sign up to get our daily horse racing news and become a winner.

Follow us on Social Media for Santa Ysabel updates!