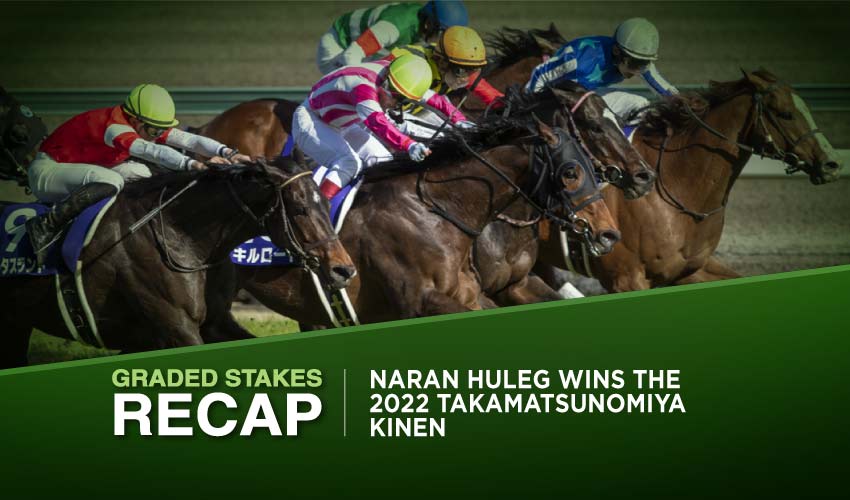 The past weekend was packed with high-class action at the Japanese tracks as three of them offered Graded races. On Saturday, three-year-olds clashed in the G3 Mainichi Hai at the Hanshin Racecourse, and four-year-old and older stayers met up in the G2 Nikkei Sho in Nakayama, where the G3 March Stakes saw dirt specialists on Sunday. On the same day, the track at Chukyo held the G1 Takamatsunomiya Kinen 2022 and witnessed an upset thanks to chestnut Naran Huleg.

This G3 race for three-year-olds attracted ten of them who clashed at the distance of a mile and a furlong. They competed for the purse of 76,540,000 Yen on the turf surface, while Yusuke Fujioka superbly used the early speed of his mount, Piece of Eight (11-2), who charged for the front right away and didn’t allow anybody to better him throughout the whole race. Crossing the wire in 1m 47.50s, he denied outsider Bejart (106-1), galloping in third, the victory by ¾ of a length. Favourite Douradores (11-10) delivered an eye-catching finish once again, yet he had to settle for third place.

Both Piece of Eight and Douradores had just two starts under their belts, while Douradores’ most recent win was quite impressive in a smaller race; still, he looked a bit green back then, so we preferred Piece of Eight to strike this. In the end, the Yutaka Okumura bound Piece of Eight not only proved mature enough to score the G3 race but most importantly, he again showed great determination when fighting for the win with Bejart, who was looming large over him.

Douradores displayed a great finish in the final stretch, but as he was charging from the back of the field, he had to make room for himself, and before he succeeded in it, he was too distant from Piece of Eight to actually threaten him. However, Douradores definitely looks to be a very promising colt for the future.

The G2 turf race offered the purse of 129,260,000 Yen which attracted a field of fifteen four-year-old and older horses. They clashed at the distance of a mile and four and a half of a furlong, over which the favourite Titleholder (3-5) prevailed in a tight finish in 2m 35.40s. The four-year-old colt scored the Japanese St Leger (known as Kikuka Sho) in 2021, so he was expected to run well here, which he did as he set the pace, and in the final stretch, he fought off his rival to bag the G2 victory by a neck in front of less carrying Boccherini (112-10). Also, other participants weren’t far away as the third Heat on Beat (53-10) crossed the wire in third just a neck behind the second horse.

The Toru Kurita trained Titleholder won the trial for the Japanese 2000 Guineas (Satsuki Sho) in 2021, then finished second in the Classic race, and after taking sixth place in the Japanese Derby, he went on to leave every single rival behind in the Japanese St Leger.

He triumphed there thanks to his front-running tactic. Even though he was only fifth in the Arima Kinen, Titleholder seems to vie to be taken seriously in the Graded Japanese races meant for true stayers. Both Boccherini and Heat on Beat affirmed to be in fine form at this time of the year, while the remaining piece of the purse went to the teams of fourth Crescendo Love (48-1) and fifth Hayayakko (103-1).

The G3 dirt race was held at the distance of a mile and a furlong and was meant for four-year-old and older horses. With the purse of 72,820,000 Yen up for grabs, sixteen participants lined up here, with Meisho Hario (48-10) belonging among the victory candidates, and thanks to his lethal finish in the final stretch, he won by a ½ of a length. Crossing the wire in 1m 50.20s, he successfully pursued leading Kenshinko (38-1) and sentenced him to second place, while Bullbear Iride (48-10) and History Maker (4-1) grabbed third place in a dead heat.

Genki Maruyama aboard outsider Kenshinko almost decided the race for himself in the final turn. He urged his mount to improve his position from the outside, and despite turning quite wide, the pale-faced horse cruised for the first place easily. In the final stretch, he looked like a clear winner; however, Suguru Hamanaka encouraged five-year-old Meisho Hario to close on the leader. Meisho Hario then caught Kenshinko right before the wire and recorded his second G3 victory. The mentioned duo of Bullbear Iride and History Maker rallied forward together and were just inseparable, so behind them, splitting the third place, Cadenas (169-10) came home in fifth.

The hugely anticipated G1 turf race with the purse of 329,400,000 Yen witnessed a narrow fight in the field of four-year-old and older horses, from which Naran Huleg (269-10) came on top. The six-year-old chestnut trained by Yoshitada Munakata successfully thronged through his rivals in this 6 furlongs-long race, and in the closing stage, he pushed through to score the race by a neck in 1m 8.30s. Naran Huleg left all the preferred horses behind, including mare Lotus Land (119-10), who finished second just a nose before outsider Kir Lord (224-1).

Although Naran Huleg ran big races in both trials towards Sunday’s G1 event, he once again faced promising Meikei Yell (42-10) or the already established great sprinter Resistencia (6-5). Still, neither of the mares prevailed this time.

Resistencia had a good start and showed the way; however, she was weakening in the final stretch, being bettered at first by Lotus Land, and then by Naran Huleg, whose Sunday’s effort was just breath-taking. The six-year-old chestnut spent the race in the midpack and had a lot to do in the turn, but Kyosuke Maruta didn’t give up by any means, managed to navigate his mount in between the participants to point Naran Huleg in the gap between his rivals in time.

Once Naran Huleg could rally forward without any bodies in front of him, he just pushed through bravely to achieve his premiere G1 success. Lotus Land took second before Kir Lord, flying on the outside, who also had to dig deep to find a room to charge, and in the end, he sentenced very diligent Travesura (26-1) into fourth place. Meikei Yell finished from the outside but couldn’t snatch a better place than fifth in front of sixth Resistencia.