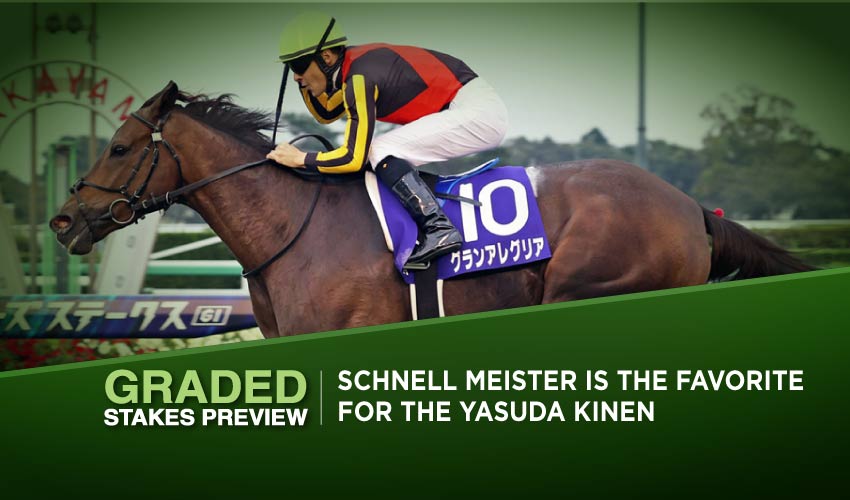 Tomorrow, the G1 2022 Yasuda Kinen is held in Tokyo. It’s one of the most prestigious races in Japan; the winner automatically receives a ticket for the Breeders’ Cup Mile.

The most likely winner is four-year-old Schnell Meister, who recorded third place in the 2021 edition, and even though he didn’t fire in Dubai, he’s always boasted lots of class, which should show here. The challenge may come from other four-year-olds in the race, filly Fine Rouge and progressive colt Elusive Panther.

The G1 turf race attracted a field of eighteen three-year-old and older horses who are about to clash at the distance of a mile. With the purse of 347,460,000 Yen, the prestigious event welcomes several horses of tremendous talent, including Schnell Meister.

The four-year-old colt trained by Takahisa Tezuka bagged the G1 NHK Mile Cup in 2021 and added a G2 victory in October, upon which he was second behind Gran Alegria in the G1 Mile Championship. Indeed, he didn’t show anything of interest in his seasonal premiere when travelling to Dubai, finishing only eighth in the G1 Dubai Turf. Still, he needs to be considered in his return to the Japanese tracks.

Schnell Meister is a classy specimen, which he should affirm once again, especially when piloted by Christophe Lemaire. Another participant whose only 2022 outing didn’t go accordingly to the plan is three-year-old Serifos, taking only fourth place in the G1 NHK Mile Cup.

The Mitsumasa Nakauchida bound colt scored the G2 Daily Hai Nisai Stakes in 2021 and finished second in the G1 Asahi Hai Futurity Stakes behind Do Deuce, the Japanese Derby-winner. In May, he might’ve just stretched his legs, and given his class, Serifos should build on that performance and play a bigger role this time.

Fillies and mares create a large part of the field, as especially Fine Rouge has been a G1 winner in the making. The four-year-old filly delivered solid results throughout her whole 2021 campaign. Besides two G3 triumphs; she was third in the 1000 Guineas and second in the G1 Shuka Sho in October.

In the ongoing season, Fine Rouge collected two second places, including one behind Sodashi in the G1 Victoria Mile. Back then, she bettered both third Resistencia and fifth Songline. The former shouldn’t be underestimated here; still, her forms don’t look as strong as in 2021, while Songline ran for the first time since her success in Riyadh.

At first sight, fifth place was disappointing, but she might’ve needed it to freshen up a bit, and on Sunday, she could be a big player here. The last to mention in this quality-pack field is Elusive Panther, a four-year-old colt that looks ready to take on such a strong competition after bagging four victories in a row.

Last time out, he bettered Fine Rouge in the G3 Tokyo Shinbun Hai, and even though he needs to make a huge leap forward to better horses like Schnell Meister, Elusive Panther seems talented enough to be actually capable of it.

Schnell Meister, who should be classier than most of his rivals here; still, he might need a run before returning to his best after the Dubai flop.

Follow us on Social Media for 2022 Yasuda Kinen updates!