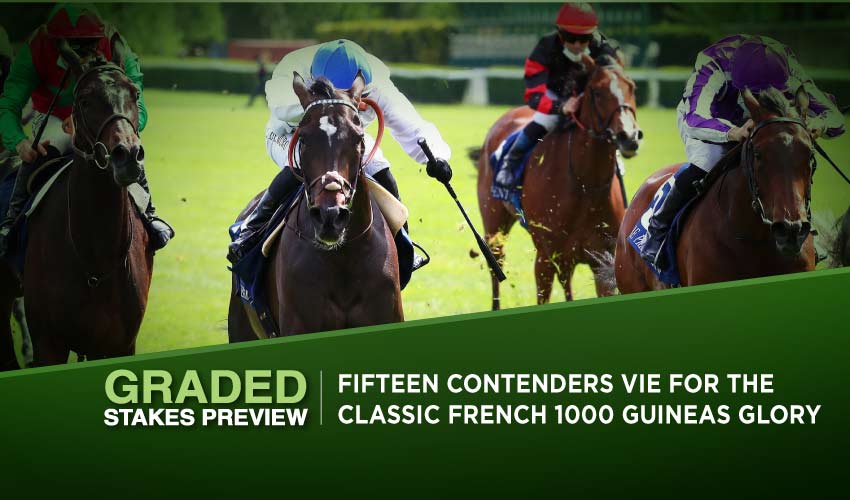 On Sunday, both the mile-long Classics will be held at the Longchamp Racecourse in France, while like in past years, the favorites are coming there from abroad. Among fillies, Cachet strives to bag a Classic double as after winning the British 1000 Guineas, she’s the leading chance for the G1 Poule d’Essai des Pouliches ( French 1000 Guineas)

Subsequently, colts will compete in the Poule d’Essai des Poulains (French 2000 Guineas), where British-trained Modern Games could draw on his excellent performance in last year’s G1 Breeders’ Cup Juvenile Turf. Still, the French are, of course, not willing to let their Classics slip away and send in winners of the local trials, filly Rosacea and colt Welwal.

The French equivalent of 1000 Guineas is, naturally, open only to three-year-old fillies who will clash at the distance of a mile when competing for the purse of €500,000. In this G1 turf race, fifteen participants vie for the Classic glory, including Cachet, who scored the 1000 Guineas in Newmarket at the beginning of May.

Having only two weeks to recover, the George Boughey trained bay still looks like the favourite here as she showed some toughness. Moreover, Cachet seems to be a filly who won’t mind the short pause and will do her best once again; however, winning on the straight mile in Newmarket is quite different from attempting the same in Longchamp.

Another British filly to talk about is Jumbly, who took a fine second in a British classic trial behind Wild Beauty, who failed to deliver in the 1000 Guineas; however, Jumbly should benefit from the run and maybe catch some of the preferred rivals off guard.

While Cachet and Jumbly travel from the United Kingdom, brilliantly bred Toy comes from Ireland. The Aidan O’Brien trained half-sister of Gleneagles, Happily, Joan of Arc, and Marvellous, has three outings under her belt, all of them run among the maiden competition. It took three tries for the chestnut to secure a victory, but when she did so in April, Toy destroyed the field by at least five lengths.

It’s a question whether the performance was so spectacular to think of Toy suddenly as of a Classic contender; however, with horses trained by Aidan O’Brien, you never know and simply need to respect them whatever the odds are. Toy would be an unlikely winner of the French 1000 Guineas, but nobody would be too shocked by the result.

In terms of local contenders, most of them lined up for the main trial, the G3 Prix de la Grotte, form which surely can any of the participants improve significantly, still, winning filly Rosacea left the best impression.

Trained by Stéphane Wattel, she achieved her fourth victory in a row as in 2021; she bagged two smaller wins before reaching her first G3 glory. Back then, she scored on softer ground, but in April, Rosacea showed she can deliver an eye-catching finish from the last place on a bit better ground, which should play into her cards.

Her travelling style could be her weakest point because it’s pretty doable to bag the race from the last place in a field of nine fillies, but when faced with the full field of fifteen, it might pose a problem. Rosacea still looks the leading chance of the locals, but Mqse De Sevigne, trained by Andre Fabre, is the winner of the G3 Prix Vanteaux over a mile and a furlong and might be a vital player, too.

Jumbly due to her alright performance in the British trial; moreover, she just looks the right type for the race

The equivalent of British 2000 Guineas is open to three-year-old colts. The purse of €600,000 attracted a field of sixteen participants who are about to compete at the distance of a mile in this G1 turf race, in other words, for Classic glory.

As in Newmarket, also in Longchamp, the leading victory candidate comes from Charlie Appleby’s lot because his Modern Games was a brilliant two-year-old who could continue his remarkable career on Sunday. In six starts, the chestnut scored four of them, including the G1 Breeders’ Cup Juvenile Turf at the distance of a mile, suggesting he could take on even stronger competition.

He lacks a preparatory outing; however, it hardly tends to be a problem in the case of Appleby’s horses. There are other interesting colts travelling from the United Kingdom, namely Bayside Boy and Claymore

The former is trained by Roger Varian and secured his most notable success in the G2 Champagne Stakes over seven furlongs. Still, he ran respectably also among the absolute elite, collecting third places both in the Dewhurst Stakes behind Native Trail and Vertem Futurity Trophy behind Luxembourg.

Jane Chapple-Hyam then relies on Claymore, who scored his debut in 2021 and finished second in the G3 Craven Stakes, the main Classic trial for the British 2000 Guineas. Back then, he got bettered only by Native Trail, which quite boosted his form for the French Classic race.

The field, of course, comprises many (not only) local three-year-olds who didn’t commence the season the best way but could improve enough to impact the Sunday race; still, we’ll stick with those who managed to catch the eyes.

The first one to mention is the Jean-Claude Rouget trained Welwal, the winner of the main French trial, the G3 Prix Fontainebleau, held over the mile-long trip. The second local contestant to talk about is his stable-mate Lassaut, who is unbeaten in his two outings; moreover, he was really impressive last time out. He’s still a green colt but boasting lots of talent. It probably won’t be enough to bag the Classic race; however, he is definitely a place contender.

Modern Games, who oozed class as a two-year-old and looked every bit of a champion who could continue his great career on Sunday