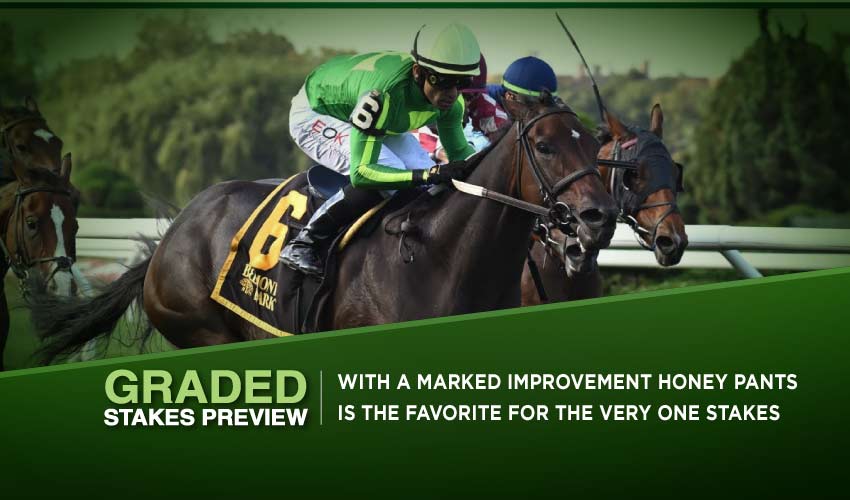 The fillies get their turn in the spotlight on Friday at Pimlico, where the main attraction is the G2 Black-Eyed Susan, which has drawn a strong and varied field with proven Graded performers Adare Manor, Interstatedaydream, and Distinctlypossible going up against local ace Luna Belle, who is riding a five-race winning streak at stakes level. Sprint distaffers get their chance in the ungraded The Very One, headed by Honey Pants and Payntdembluesaway.

The distaff equivalent of the Preakness is – like the versions at Churchill Downs two weeks ago – as deep and competitive as the colts’ race, although none of the runners from the Kentucky Oaks have come on here for the Black-Eyed Susan, the feature event at Pimlico on Friday.

There are obviously plenty of formlines joining the two, with Interstatedaydream (6-1) leading the way thanks to her performance in the G1 Ashland at Keeneland, in which she ran third – admittedly beaten eight and a half lengths – behind Oaks runner-up Nest.

She made the running that day before faltering in the face of a superior rival but showed no quit when the race had gone and was beaten just a nose for the ‘place’ position.

If she’s on the lead again today she may take pressure from Adare Manor (5-2), who trailblazed her way to a 13-length score in the G3 Las Virgenes at Santa Anita before coming up short in the G2 Santa Anita Oaks, when she was outfought by longshot Desert Dawn and beaten a neck. The winner franked the form when third in the Oaks and Adare Manor sets the standard.

Another with Oaks connections is Favor (8-1), who could never land a blow at subsequent Louisville fourth Echo Zulu when third, beaten two and a half lengths, in the G2 Fair Grounds Oaks on her stakes debut. The experience will have done her good and there may be more to come.

Local heroine Luna Belle (9-2) has been tearing it up at Laurel Park this winter and comes here on a five-race winning streak, all in stakes. Two starts back she was always in the front rank over a mile before clearing away to win by three and a half lengths from Candy Light (20-1), and a month ago utilized more patient tactics before hauling off to win by four and a half over a mile-sixteenth. She’s a star, and although she takes on much stronger opposition now could well be up to the task.

Beguine (12-1) was also-eligible for the Oaks but missed out, although the form of her neck second to Yuugiri in the G3 Fantasy at Oaklawn Park took a knock when the winner was well down the field at Churchill Downs. She has something to prove now, as does Radio Days (12-1), who is zero-for-three in 2022 and an unknown quantity at this distance, having done her best running at seven furlongs.

A few of these are making the major step up from maiden wins, with by far the most interesting being Distinctlypossible (6-1), who on her last start of 2021 was runner-up to Juju’s Map in the G1 Alcibiades at Keeneland. Five weeks ago, on her first start for six months, she shed her maiden tag on a return to Keeneland when beating Miss Yearwood (20-1) – an easy winner since – by a comfortable length and a quarter, and it is more than possible that she will move up a long way from that reintroduction.

Two defeats in Graded company indicate that Divine Huntress (15-1), a length and a half ahead of Morning Matcha (20-1) when they ran fifth and sixth in the G3 Gazelle at Aqueduct last month, may need an easier spot, which also applies to Midnight Stroll (15-1), winner of a seven-furlong state-bred stake at Tampa Bay Downs.

There are five or six here with leading claims, but the choice is DISTINCTLYPOSSIBLE, who is sure to come on a ton for her easy reappearance win and had solid G1 form last year.

The Very One Stakes Odds

There’s a big field for The Very One and it’s bound to be a helter-skelter affair over the flying five, but two contenders stand out from the crowd.

The key is in the details for Honey Pants (5-2), who showed marked improvement for first-time blinkers when driving clear to win an allowance optional claimer at Gulfstream Park last month. The headgear stays on and she also gets Lasix again, with which she has never been out of the first two, and the guaranteed pace of a big field will aid her late-running style.

Her main rival is likely to be Payntdembluesaway (3-1), who has an enviable nine-for-15 record and who returned to winning form last time when surging clear in a Tampa Bay Downs stakes. That was her second victory in stakes company and she is also well suited by having plenty of pace to run at.

Another with a splendid resume is Princess Kokachin (6-1), ten-for-17 lifetime but needing to bounce back off a dull effort when fourth in a stake at Laurel Park last month, while also on a recovery mission is Phantom Vision (6-1), twice a winner on the synthetic surface at Gulfstream Park – beating Honey Pants on the second occasion – but out with the washing back on the weeds in a stakes at Keeneland last time.

Last year’s The Very One seventh, eighth and tenth Can The Queen (12-1), Epic Idea (20-1), and Dendrobia (30-1) try their luck again, with Can The Queen by far the best of the three now after coming off a good effort in stakes at Laurel last month, in which she was right there until fading late to finish fourth.

This is a strange spot for Adelaide Miss (10-1), who was third in a stake at the Fair Grounds over a mile-sixteenth two starts ago and has been competing at around a mile for some time. She could be run off her feet here.

The Very One Stakes Betting Prediction

There is a lot to like about HONEY PANTS, who moved up for the fitting of blinkers when an impressive winner last time and gets the headgear again, as well as the benefit of Lasix.

Sign up and get up to a 10% horse rebate. We have the biggest rebate! Check our Preakness Stakes odds, racing entries, and races results.