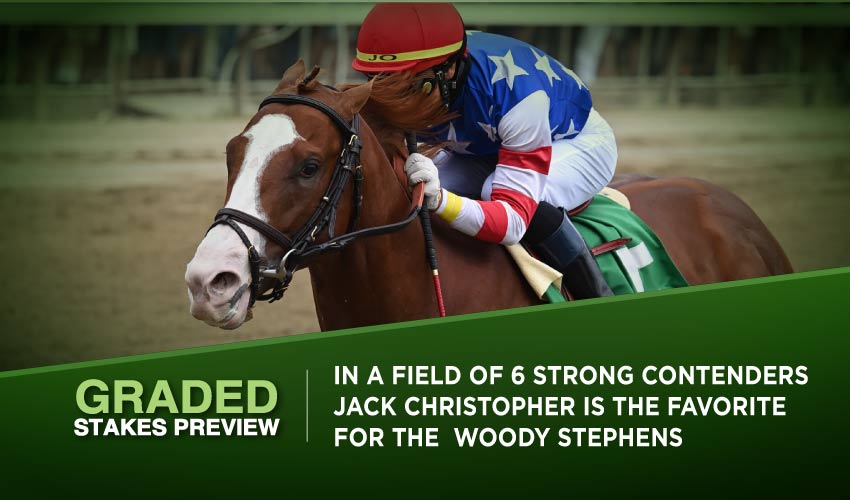 The undercard at Belmont Park on Saturday is no ordinary undercard, being full of G1s and big names that would dominate almost every other racetrack afternoon. The excitingly progressive Jack Christopher defends his unbeaten record in the G1 Woody Stephens, while his trainer Chad Brown appears to have a lock on the G1 Just A Game with star mares Speak Of The Devil and Regal Glory. Some old familiar faces lock horns again in the G1 Manhattan, with Gufo, Tribhuvan and Channel Maker taking on the upwardly mobile pair Santin and Adhamo.

The Woody Stephens commemorates the Hall of Famer who trained the Belmont Stakes winner five years running (1982-86), and this year it showcases one of the potential superstars of the American scene.

Chad Brown keeps things simple for bettors for a change with just one representative, and he only needs one because thus far in his career Jack Christopher has been flawless, unbeaten in three and denied the chance of greater glory only by an injury that kept him out of the Breeders’ Cup and off the Kentucky Derby trail.

He rose to prominence when winning the G1 Champagne here over a mile in October, coasting home by two and three-quarter lengths with Wit a never-dangerous third, seven lengths further back. Then injury intervened, but Jack Christopher returned better than ever in the G2 Pat Day Mile at Churchill Downs last month, showing no signs of rustiness as he cleared away to beat the pace-setting Pappacap by three and three-quarter lengths, value for more than the official margin in a performance brimming with star potential.

The cutback in distance is a point to ponder, but such is Jack Christopher’s abundant class that it’s unlikely to be a major obstacle.

That Champagne run was the last we saw of Wit at two, but he returned in good order to win the G3 Bay Shore at Aqueduct in April, getting up on the line to win by a nose, and can move up on that performance. That’s more than can be said for Pappacap, who has failed to translate his fine form at two into a sophomore campaign and disappointed all the way down the Derby trail. His effort in the Pat Day Mile was a welcome improvement but he is on a losing streak of seven and remains unconvincing.

This is the first awayday from Aqueduct for Morello, who won three straight at the Big A including the G3 Gotham over a mile, before falling off the Triple Crown trail when sixth in the G2 Wood Memorial behind leading Belmont Stakes contender Mo Donegal. Stamina was always a concern for Morello and this cutback should be to his advantage, although he has yet to indicate that he can flourish at the top level.

His barnmate Chasing Time is another Road to the Kentucky Derby casualty; he was third in the G3 Chick Lang at Pimlico over six furlongs three weeks ago and has a long way to go to be competitive in this company.

Wit’s barnmate Provocateur makes his Graded-stakes debut and, although he shaped well when beaten just a neck in a stakes here over six furlongs last month, could easily be out of his depth.

It’s impossible to get away from JACK CHRISTOPHER, an unbeaten G1 winner who is the obvious choice to maintain his progress towards the top of the tree.

The usual suspects are rounded up again for the Manhattan, old favourites renewing rivalry for the umpteenth time in yet another stand-out contest on a G1-loaded Saturday afternoon at Belmont Park, a race won by Chad Brown in seven of the last ten years and the last three running.

As in Friday’s G1 New York, Brown sends four into battle, but this time he doesn’t have the morning-line favourite. That honour belongs to Gufo, third in this race last year before winning the G1 Sword Dancer at Saratoga over a mile and a half. The five-year-old seems better at that longer distance, over which he won the G2 Pan American at Gulfstream Park in April, and he was only second-best back at a mile and three-eighths here in a slowly run G1 Man o’War, when he could never get to grips with longshot Highland Chief, who beat him a length.

That was a shock return to form for ex-British Highland Chief, but he sat behind slow fractions there before pouncing, an unlikely scenario today, and is also not ideally suited by this cutback in distance.

The best of Brown’s quartet appears to be Adhamo, a G3 winner in France who has adapted swiftly to life Stateside. He posted a decent effort when third in the G1 Turf Classic at Churchill Downs over a mile-eighth, rallying late without ever mounting a challenge, six and a half lengths behind Santin, who pressed the pace before keeping on gamely to get there by a neck, reversing earlier placings with Adhamo from the G3 Fair Grounds down in New Orleans.

That was a career-best for Santin, who has improvement in the bank after just six races, and both he and Adhamo should benefit from the extra yardage today. Adhamo’s barnmate Tribhuvan, runner-up in this race 12 months ago, was fifth in the Turf Classic and will also improve for stretching back out, although he hasn’t been at his best in three starts since winning the G1 United Nations at Monmouth Park over a mile and three-eighths last July.

Brown’s remaining pair L’Imperator and G1 Joe Hirsch Turf Classic winner Rockemperor were first and fifth in the G2 Fort Marcy here at a mile-eighth last month, and their overall profiles give them plenty to find in this company.

The G1 Keeneland Turf Mile winner In Love has been given a tough spot to try stretching out for the first time, while old-timer Channel Maker won a weakish G2 Elkhorn at Keeneland over a mile and a half on his reappearance and may no longer have the kick to cut back in distance. He has run in the Manhattan three times before and never finished better than fourth, and there’s no reason for him to improve on that record.

Chad Brown has the numbers but may have to concede to SANTIN, who ran a lifetime best to win a G1 last time and is likely to appreciate today’s extra distance.

Like the Manhattan, like the New York the day before, Chad Brown wheels out the big battalions for the Just A Game, ‘only’ three in the gate this time but the first three in the mutuel pools for a race he won four years straight until missing out 12 months ago.

The most intriguing of his trio is the ex-French Speak Of The Devil, G1-placed in her native land and who made an immediate and profound impact Stateside when hosing her rivals in the G2 Churchill Distaff Turf Mile at the Louisville circuit, making up for a slow start by passing the entire field in the stretch to win going away, brushing aside front-running barnmate In Italian by two and three-quarter lengths and third-placed Wakanaka by another three.

As first impressions go, it couldn’t have been better, and Speak Of The Devil can only move up for that first outing off a six-month layoff. She has clearly retained all the class that got her the runner-up berth in the 2020 French 1,000 Guineas mile classic, and despite her experience can still be considered an unknown quantity.

The lightly raced In Italian is firmly on the upgrade, having previously won the G3 Honey Fox at Gulfstream Park when making all and turning back runner-up Wakanaka to score by a length and a quarter. She will be a fine rabbit for Speak Of The Devil to chase but will need to find plenty more to stay ahead.

A bigger danger to the favorite will be barnmate Regal Glory, who has been fourth in this race for the last two years but has raised her game considerably in the last six months, winning the G1 Matriarch at Del Mar, the G3 Pegasus World Cup Filly & Mare Turf at Gulfstream Park, and most recently the G1 Jenny Wiley at Keeneland.

She won in California when going gate-to-wire over a mile, in Florida when coming from the back of the pack over a mile-sixteenth, and in Kentucky when pressing the pace over a mile-sixteenth. Such tactical versatility is a big plus, although she is unlikely to be on the lead today. There may be further improvement to come and she could well take advantage if her flashier barnmate doesn’t bring her A-game this time.

West-coast raider Leggs Galore is also in the form of her life, riding a three-race winning streak at Santa Anita with the pick of them being the G2 Buena Vista over a mile, in which she led at every call and kept going to win by a length. She has bags of pace and could vie with In Italian on the lead, although the suspicion remains that a mile is her absolute maximum and at this level she may be running on empty through the final furlong.

Chad Brown again, but which one? Regal Glory is a solid option but SPEAK OF THE DEVIL was brilliant on her US debut and looks capable of even more.